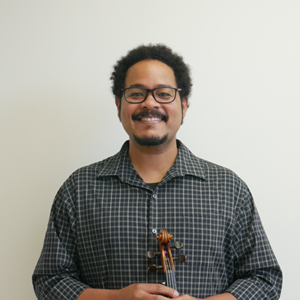 In the summer of 2018, Mishkar helped found Opera Ritrovata, a mobile opera company dedicated to performing the
works of women and minorities. In the fall of 2020, in conjunction with colleagues from Opera Ritrovata, Mishkar
became the first publisher to render a modern engraving of the only surviving opera by Joseph Bologne, L’Amant Anonyme,
including the reconstruction of previously unfinished movements. Mishkar is also co-founder and artistic advisor of the award
winning chamber ensemble Delirium Musicum. Additionally, he is artistic associate of the period community ensemble
Los Angeles Baroque, LAB. In the spring of 2012 he was honored with the Cultural Personality of the Year 2011
Award from the Ministry of Culture of the Dominican Republic.

Mishkar Nunez-Fredell has given masterclasses in violin at various institutions including Luther College in Iowa,
Azusa Pacific University in California, the University of Wisconsin Madison and Hogar de la Armonia School of Music
in Dominican Republic. He has also been a guest lecturer at the University of Southern California in the subject of medieval
musical notation. In addition to his academic engagements, Mishkar teaches small children and their care-takers how to
interact musically while introducing musical concepts in an accessible way in a “mommy and me” setting. Most recently, he became the newest member of the Kadima String Quartet.