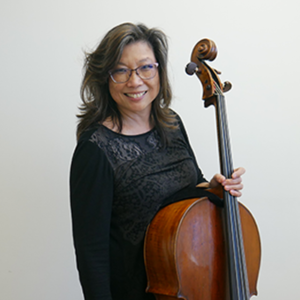 Catherine Biagini, cellist, began studying piano at the tender age of 4 and added the cello at age 9 studying with Raymond Davis, principal of Seattle Symphony. She continued with both instruments until college where she earned a Bachelor’s degree in Clinical Dietetics from the University of Washington while still pursuing the cello. She soon realized that music, and the cello, was the path she should follow and finished a Bachelor’s degree in Music Performance from the University of Washington, studying with Toby Saks. In 1985 during her last year at UW, she won the position of assistant principal of Northwest Chamber Orchestra. As principal of Northwest Chamber Orchestra, she performed all six Bach Brandenburg Concerti with Ken Cooper and Ransom Wilson among others. The recipient of the 200+1 Performance Grant while in Seattle, Catherine went on to procure the principal position in Savannah Symphony Orchestra in Savannah, GA which she held for 6 seasons before relocating to Phoenix, AZ, and then Los Angeles, CA. She has worked with such luminaries as Yo-Yo Ma, Itzhak Perlman, Pinchas Zukerman, and Mstislav Rostropovich. She has participated in music festivals in Spoleto, Italy, Charleston (SC), Round Top (TX), Bear Valley (CA), and Coos Bay (OR). Catherine has appeared as soloist with several orchestras including Savannah Symphony, Hilton Head Chamber Orchestra, Santa Cecilia Orchestra, Pasadena Community Orchestra, and most recently, Glendale Community College Orchestra in October 2018, where she is an adjunct cello professor. She has also toured the United States, Italy, and China, with various orchestras. Back home in Los Angeles, she is currently the principal cellist of Santa Cecilia Orchestra, Thousand Oaks Philharmonic, and Burbank Philharmonic, as well as Associate Principal of Downey Symphony Orchestra and Redlands Symphony. On the wilder side, Catherine is a member of Angels of Venice, a band that performs a range of repertoire from Renaissance to Metallica. She has released 5 albums with Angels on the Windham Hill label. You can also view her in a Jeep 2014 commercial on YouTube.

Cathy currently lives in La Crescenta, CA with her husband and two children. She is always in search of the best boba drink.