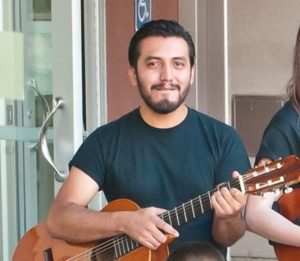 Jose Perez, better known as Pepe, is the Director of Guitar Studies, Strings Faculty, and Administrator at the Kadima Conservatory of Music. He is also a private music instructor in the San Fernando Valley area and beyond. His instruments include Guitar, Bass Guitar, Ukulele, Piano, and Violin. Languages include English, Spanish, and French.

Pepe has been involved with Kadima since 2009. Originally starting out as a Strings Coaching Assistant, he has worked throughout the years and become an integral member of Kadima Faculty. Pepe has always been an ardent believer of Kadima’s message of learning something and passing it on.

Pepe’s music studies began on the guitar with former Guitar Foundation of America president, Robert Mayeur. He has since studied with guitarists Martha Masters, Scott Tenant, William Kanengeiser, Andrew York, Kate Lewis, and current president of the American Guitar Society, Gregory Newton.  Pepe is also a current member of the AGS, the oldest guitar society in the United States.